Plyometric exercises are widely used to augment explosiveness of athletic movements. The box jump is one of the first movements that comes into mind when considering sound hip function. The box jump is a multi-joint lower body movement. The idea of the box jump is to exert maximal force into the ground, creating an explosive movement that propels the athlete onto the box. The three key phases of this activity are the eccentric(dip), concentric (Jump), or triple extension followed by eccentric(land) phase.

The box jump movements occur in the Sagittal plane and transverse axis — the starting position of the feet is just under the hips and fully extended hips and knees. To initiate the box jump, the athlete hinges from the hips by pushing hips back and down results into hip flexion . The prime mover for hip flexion is Psoas major. The knee joint will flex and move forward, resulting in a partial squat position, the prime mover for the knee is biceps femoris. The ankle joint is going into dorsiflexion with Tibialis anterior being the prime mover . 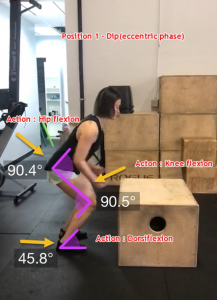 Next phase of the jump is amortization and concentric phases where elastic force is released also known as a triple extension at hips, knee, and ankle by pushing into the ground resulting into the elevation of the athlete. Gluteus maximus (all fibers) are prime mover to extend the hips in the sagittal plane. Rectus femoris contraction results in knee extension followed by ankle plantarflexion with Gastrocnemius being the prime mover.

The landing position is similar to a partial squat position with hips and knee flexion and dorsiflexion at the ankle. The prime mover for hip flexion is Psoas major. The knee joint will flex and move forward; however, it stays behind the toes, resulting in a partial squat position, the prime mover for the knee is biceps femoris. The ankle joint is going into dorsiflexion with Tibialis anterior being the prime mover. The end position of the box jump would be the same as the starting position with full hip and knee extension like standing on top of the box. 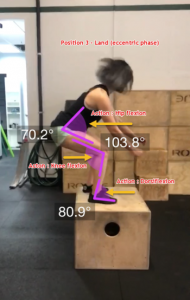 Plyometric exercises are recommended to enhance sports performance but may also be part of a rehabilitation program post-injury . Box jumps have been the go-to tool to introduce sound hip functions in training. Box jumps act as a gateway to strength-speed training for novice athletes.

Start your free trial today to get access of our world-class training and coaching: