The front squat builds exactly on the mechanics of the air squat. All that is added is a load supported in the front-rack position, where the weight sits squarely on the upper chest and shoulders, and the elbows point forward to bring the upper arms parallel to the floor. This “rack position,” critical to weightlifting, both demands and improves wrist and shoulder flexibility while the load, supported by the torso, both demands and improves midline stability.

Role of Spine and Thorax during Front Squat:

The execution of the front squat is the same as the air squat. The athlete sits the hips back and down to the proper depth and then stands back up and the barbell remains in the front-rack position for the duration of the movement.  Anterior bar placement keeps the torso vertical, preventing the hips from going into an excessive anterior pelvic tilt, and requiring greater oblique and rectus abdominis involvement to prevent flexion. A stronger anterior core can prevent flexion-based injuries to keep athletes safe. 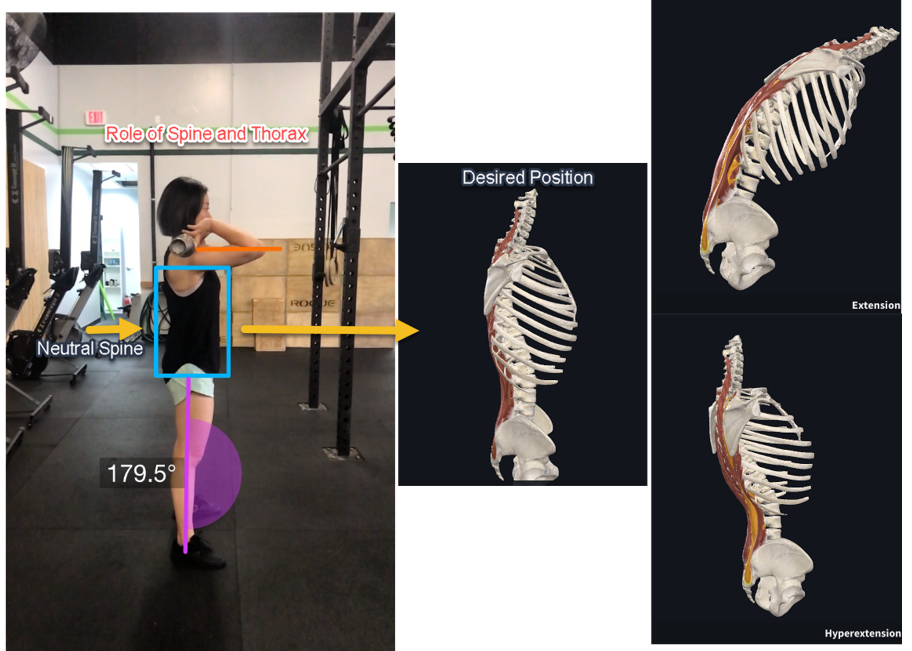 Role of Abdominal during Squat – 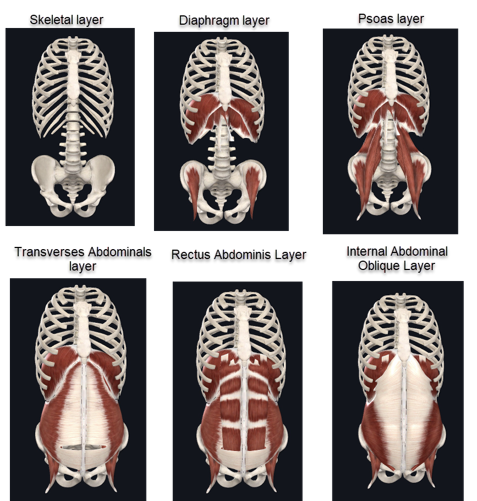 Role of Back during Squat –

We are going to break the Front squat into 3 different phases:

Each phase can be classified into either the static phase or dynamic phase of the movement. I will discuss points of performance to execute the movement in each phase, I will be using anatomical references and terminology to describe the movements.

The starting and end position is for the Front squat is an upright standing position with a neutral (1) Spine to create stability around the core. Hip joint (2), Knee Joint (3), and ankle (4) joint remain neutral which is a full extension of the joints and looks close to 180-degree angle deplanement on the sagittal plane.

The stance is with the heels at shoulder width and the toes out slightly. The athlete creates a shelf so the barbell can rest on the shoulders by placing the hands outside the shoulders, using a loose fingertip grip (5), and driving the elbows high so the upper arm is parallel to the ground. This rack position allows the barbell to rest directly on the torso and does not load the comparatively weaker structures of the wrist or arm. 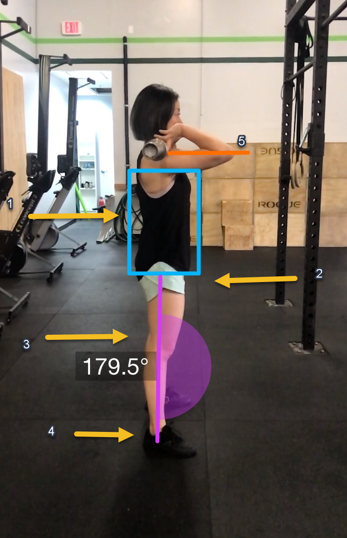 The descending portion of the squat starts with hip (2) flexion by pushing it back and down, resulting in knee (3) flexion to provide stabilization.

The hip flexors activate to control the descent of the weight and to assist the Spine (1) (vertebral column) in being in a natural position. The knee extensors and flexors both contract to allow for controlled descent of the body. The barbell remains in the front-rack position for the duration of the movement.

The hip extensors also contracted to allow for increased stability of the back and hips. Weight of the body stays in the back part of the frontal plane by keeping weights on the heels, allowing to engage the posterior chain of the body. The core muscles stay in an isometric contract to increase stability and to protect the spine from injury.

From the seated position or at the bottom of the squat position, we must overcome the force of gravity to push the front load upward. The Ankle (4), knee (3), and hips(2) all start to extend at the same so that the thigh can move out of the seated position, and we can be then able to begin to stand up. The hip extensors also pull on the thighs to allow the hip and back to come to a more erect position. The core muscles stay in an isometric contract to increase stability, to keep the barbell close to the frontal plane, we need to drive the elbows up (5) as we stand up. 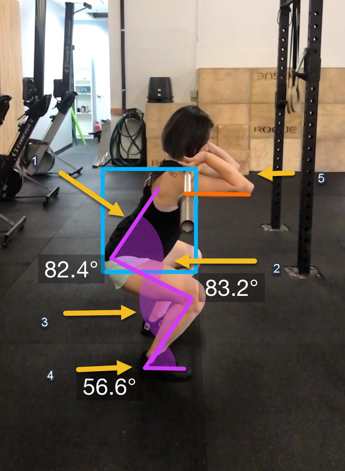 At the bottom position of the squat, the hip joint (2) is lower than the knees (3) as seen in the picture below.  This forces the hip extensors to activate more since they are becoming lengthened and allowing them to provide more stabilization. The knee extensors, flexors, and hip flexors are all also contracting to allow for a stable, seated position. The core muscles stay in an isometric contract to increase stability. Full range of motion is essential to sound squat mechanics. Elbow (5) stays parallel to the ground to keep the mechanical advantage of the torso angle. 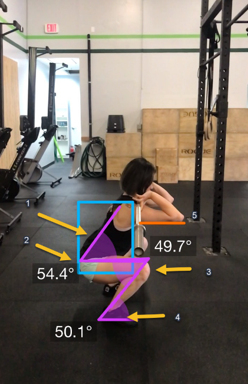 The frontal plane is the plane that equally divides the body into forwarding and back halves. The frontal plane is a static reference point to show where the athlete is balanced. The further we deviate from the frontal plane, the greater the demand on the midline and the higher the chance of losing balance or collapsing in the lift.